Pumpkins for a Purpose: Fall Fun For Life 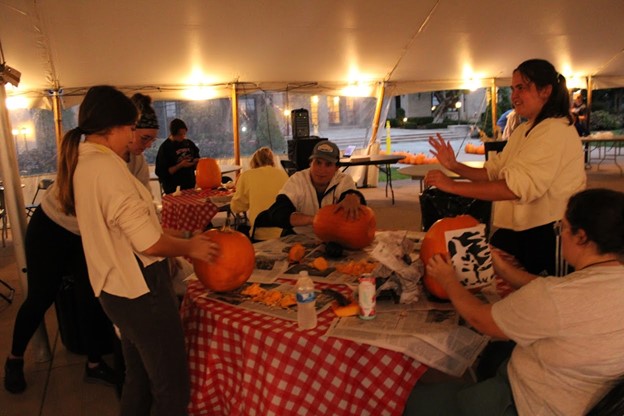 In the spring, some students at Concordia University, Ann Arbor, approached Dr. Charles Schulz of the theology department about starting a Life Team on campus. This fall, while hosting a table on central campus, a number of other students came forward who were eager to support the For Life cause. The group settled on the name Cards4Life to connect it to the Y4Life movement among the other Concordia schools. They also decided to debut their organization with a pumpkin carving contest to raise funds for a worthy cause. God blessed their creativity with good success and good connections with the campus.

As they moved toward organizing the event, they found that the student services staff had already planned a pumpkin carving contest. However, they welcomed the student initiative and were glad to have Cards4Life take over the activity. Student Services then provided all the pumpkin carving tools and the reserved space on campus, as well as help with coordinating the logistics of storing and displaying the pumpkins. One of the Cards4Life students who commutes to campus from rural Michigan also asked local farmers for donations of pumpkins. Hearing of the cause, they were glad to contribute, and thirty pumpkins were soon tucked away for the event.

On October 5, students were invited to carve pumpkins for free and to select from a number of pro-life causes. From Wednesday through Friday, faculty, students, and staff on campus were then invited to vote for their favorite pumpkin, at a cost of $.50 per vote. The pumpkin and the cause with the greatest votes would take the total of the contributions. Donations were also taken via Venmo.

In the end, $382.50 was raised. Winning carvers, Ellie Fritcha and Luke Neuhaus, were celebrated at the break between the first two quarters of the homecoming game that Saturday. The winning charity was Family Life Services of Ypsilanti, Michigan, a pro-life pregnancy counseling and resource center. With such a great beginning, Cards4Life is looking forward to the next work God will do through them For Life!