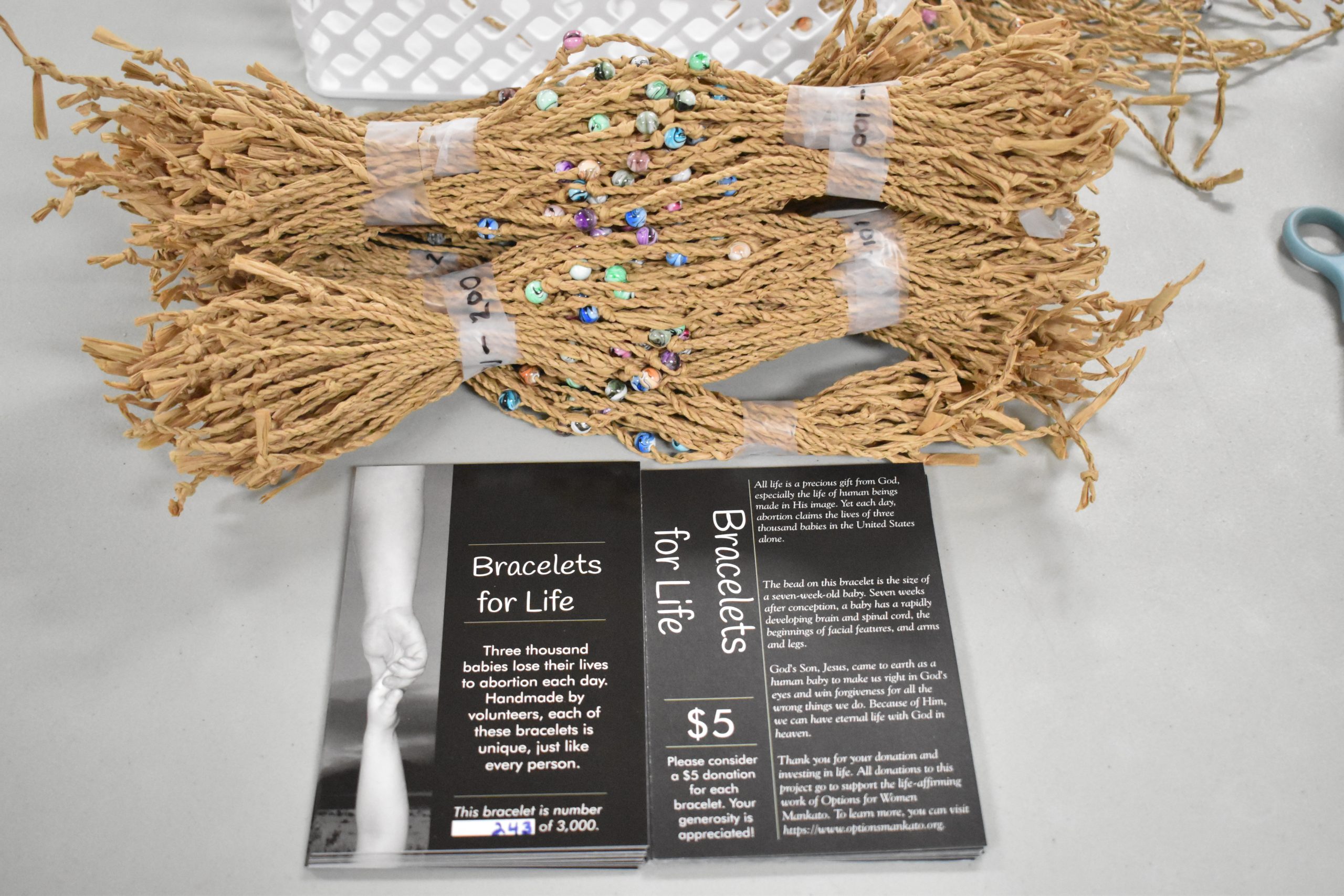 Four hundred ninety-eight, four hundred ninety-nine, five hundred! I laid aside the most recent bundle of twenty-five bracelets, finally one-sixth of the way to reaching my goal—making three thousand bracelets to represent the three thousand babies who lose their lives to abortion each day in the United States alone. Like every baby, each bracelet made in this project is unique. The bracelets are handwoven out of raffia by volunteers—so far, twenty volunteers from four states. Each bracelet has a single bead, which is the size of a baby seven weeks after conception. Tiny though the beads are, a baby this size already has a brain, a spinal cord, facial features, arms, and legs.

But how did I end up on this journey? Sometime last October, when we were laying awake in our room, my sister said to me, “Three thousand babies are aborted each day.” We hadn’t been talking about abortion or prolife issues before that, but she had paged through our homeschool history textbook earlier that day, and had seen the statistic. I had heard that number before, but it struck me in a new way to hear it late at night as I was beginning to fall asleep. Suddenly, I was wide awake, and ideas were churning through my head. There are things in the world that I know I can’t fix, but I felt compelled to at least try to do something about this: I could make and distribute simple bracelets. The next morning, I told my mom about my idea. She was supportive, but pointed out that my sister and I were preparing to volunteer at our local historical reenactment festival later that week. A big project like this was going to have to wait, and it wasn’t until the following spring that I really began work on it.

There is a lot that I hope to accomplish with this project. One of my main goals is simply to create more awareness about the magnitude of abortion. While people may have heard the statistic that three thousand babies are aborted each day, they might not realize what a huge number that actually is. (I didn’t until I started making that many bracelets by hand!) The bracelets are distributed with postcards that explain this project and request a donation to our local prolife clinic. These postcards are numbered 1 to 3,000, making this number more personal to the people who receive these bracelets.

Another goal I have with this project is to offer people a practical way to help. While someone may want to help prevent abortion, he or she might not know how to go about doing so. Those who are able to can help make the bracelets. For those receiving the bracelets, the postcards offer an easy way to donate to the prolife cause. I also hope that the bracelets will be able to start many conversations about the sanctity of life.

My final—and highest—goal is to share the message of forgiveness we all have in Christ, even those who have participated in the deaths of the unborn. I don’t just believe that life is precious—I believe it is precious for a very specific reason. God created life, and made humans in His own image. We have fallen from this image, but He sent His own Son as a baby—yes, Who once was the size of that bead when He was in Mary’s womb—to live and die for our forgiveness. This message is included on the postcards that will be distributed with the bracelets. I hope and pray that all who see it will come to believe that their sins are forgiven by Jesus’ death and resurrection.

I still have a long ways to go on this project, but I haven’t lost enthusiasm yet. There have been moments where I found myself frustrated at the prospect of having to measure out and cut raffia… 2,500 more times… but I have never regretted beginning, and I look forward to the day when I can see this project through to its end: two thousand nine hundred ninety-eight, two thousand nine hundred ninety-nine, three thousand!

For more information, or to support this project, please visit www.intoyourhandsllc.com/bracelets-for-life.